A lady of firsts: Jill Biden makes history by being the first in her role to hold a day job 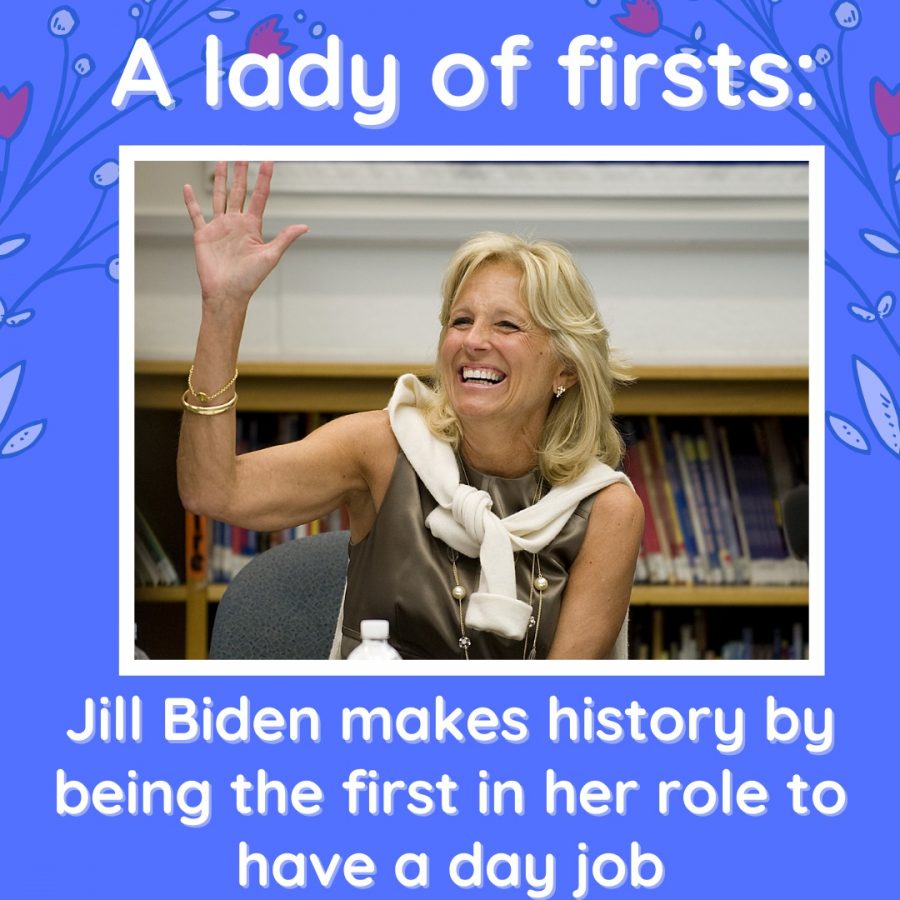 The wife of President Joe Biden is set on rewriting the typical role of the first lady in the United States. Dr. Jill Biden, who holds a doctorate in education and two master’s degrees, says she will continue her day job as a professor while still fulfilling her duties as the first lady.

This might not come as a surprise since she was, in fact, an English professor at Northern Virginia Community College during her time as second lady of the United States. Biden has been a community college professor for over 30 years and doesn’t plan on stopping any time soon. This has never been done before; a first lady with a full-time job outside of the White House is unheard of. Biden is setting a new social standard for future first ladies while setting an example for Americans, demonstrating that presidential spouses have a lot more to offer than just emotional support.

However, Biden isn’t the first to bring change into this role. Eleanor Roosevelt, the wife of 32nd president, Franklin Delano Roosevelt, set forth this original precedent when she did more than just stand by her husband’s side. Roosevelt took over her husband’s work when he got polio and did all the heavy lifting during that time. She did a lot for human rights as well as women’s rights, according to BBC. Recent first lady, Michelle Obama, was a major advocate for physical activity, nutrition and healthy eating, just to name a few. Her “Let’s Move!” public health campaign is well known and transformed the school food environment. She also worked on many projects regarding poverty awareness and education. With Michelle Obama opening a modernistic door for the first lady title, Biden will not only continue her legacy, but add to it.

“Jill Biden will bring the role of the first lady of the United States into the 21st century,” said Ohio University history professor Katherine Jellison.

Jill Biden has proven to be someone who doesn’t stick to the status quo.  When she was little there was a bully at her school who would throw worms at her sister, and when she found this out she marched up to the bully’s house, knocked on his door, and punched him right in the face. According to a CNN article written by Paul LeBlanc, while on the campaign trail when many hecklers crashed some of Joe Biden’s rallies and eventually got on the stage that she and her husband were standing on, she fought them off and protected her husband from them. After that occurred, she was asked by reporters about the incident, and she simply responded, “I’m a good Philly girl” while laughing. She has also proven to be very charismatic and full of laughs– she is often known for pulling fun pranks on her husband as well as her former White House staff.

“The White House is a serious place, with serious people, doing serious work,” Biden said. “If you’re not careful, it can grind you down.”

According to the National First Ladies Library, the typical first lady duties are to be a trusted advisor to the president, have involvement in some political campaigns, represent the president and attend official and ceremonial occasions. With Biden continuing her role as a community college professor in addition to her duties as first lady, she will add a more modern take to the position.

As she changes social norms, she also brings awareness to the critical topic of education and its importance in our country. While being a huge activist for free community college, she believes in the good of education and how everyone should have access to it.

“It’s important, and I want people to value teachers and know their contributions and lift up the profession,” Biden said.

Jill Biden is changing the first lady game by setting a new example for future first ladies to come, which is truly refreshing.