The growing hypocrisy of the Republican party

Confirming Judge Barrett betrays the ideals of our nation 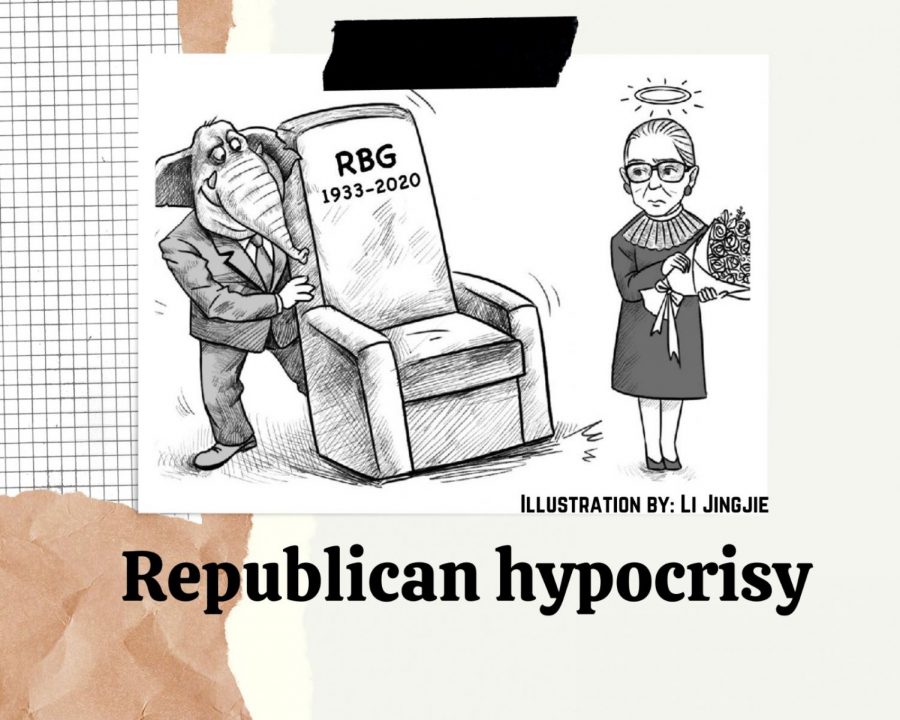 The recent polemical decision to confirm Judge Amy Coney Barrett to fill the vacancy left by Justice Ruth Bader Ginsburg only eight days before the presidential election is just another example of the increasing corruption and hypocrisy that animate today’s Republican party.

In February 2016, nine months before the presidential election and 11 months before the newly elected president would take office, conservative Justice Antonin Scalia, died, leaving Barack Obama, who was president at the time, the opportunity to appoint a new justice to the Supreme Court. Under Article II of the Constitution, the president has the power to nominate and appoint public officials to be confirmed by the Senate. Obama, well within his rights, nominated a more liberal Judge Merrick Garland, Chief Judge of the U.S. Court of Appeals for the D.C. Circuit. However, his nomination was blocked by the Senate, who, led by Majority Leader Mitch McConnell, stated that the vacancy occurred too close to an election, and thus it would not be fair to nominate a new justice. This action set a precedent that the Senate would not confirm new Supreme Court justices during an election year.

“Given that we are in the midst of the presidential election process, we believe that the American people should seize the opportunity to weigh in on whom they trust to nominate the next person for a lifetime appointment to the Supreme Court, ” McConnell wrote in an opinion piece along with Republican Judiciary Committee Chairman Sen. Chuck Grassley.

Now, in 2020, less than two months before the presidential election and while millions of ballots have already been cast, a vacancy opened in the Supreme Court with the passing of Justice Ruth Bader Ginsburg this September. Less than two hours after the Supreme Court announced Ginsburg’s death, and before President Trump even commented on whether or not he would nominate another justice, McConnell issued a statement declaring that the Senate would vote to confirm Trump’s nominee.

When confronted over his reversal of policy, McConnell offered a lame justification: because the Senate and presidency are held by the same party, the previous decision does not apply. What does it say about our elected officials that despite setting a clear precedent, when faced with the option of increasing their power, morality be damned?

Additionally, Graham declares that refusing to fill a vacant seat of the Supreme Court during the last year of a president’s term is going to be “ the new rule.”

Apparently, this “new rule” doesn’t apply when it is of detriment to the Republicans. However, not all Republicans agree with McConnell’s recent decision. Sens. Lisa Murkowski of Alaska and Susan Collins of Maine have announced that they will not support the effort to confirm Trump’s nominee.

Prior to Justice Ginsburg’s death, the Supreme Court was dominated by conservative justices such as Justices Clarence Thomas and Brett Kavanaugh, outnumbering the more liberal justices 5-4. Barrett’s confirmation brings the conservative majority to 6-3. In addition to betraying democratic ideals and basic principles of fairness, Barrett’s confirmation now jeopardizes the basic human rights of millions of Americans with her conservative stance on key issues such as the Affordable Care Act (ACA), gun control, gay marriage and abortion.

According to NBC News and Advisory.com, Barrett has sided with the dissenters on rulings regarding the ACA and Obergefell v. Hodges, which legalized gay marriage. On abortion, Barrett has twice ruled in favor of restricting access to abortion care, written that abortion is “always immoral” and signed a letter to Catholic bishops affirming several of the church’s teachings, including that life begins at conception. America has a separation of church and state for a clear reason: religious ideology should never play a role in restricting people’s liberties.

Obama summed it up perfectly when he said, “A basic principle of the law – and of everyday fairness – is that we apply rules with consistency, and not based on what’s convenient or advantageous in the moment.” The Republican party should be ashamed by their display of blatant hypocrisy and obvious power grab.