Be Our Guest is Back! 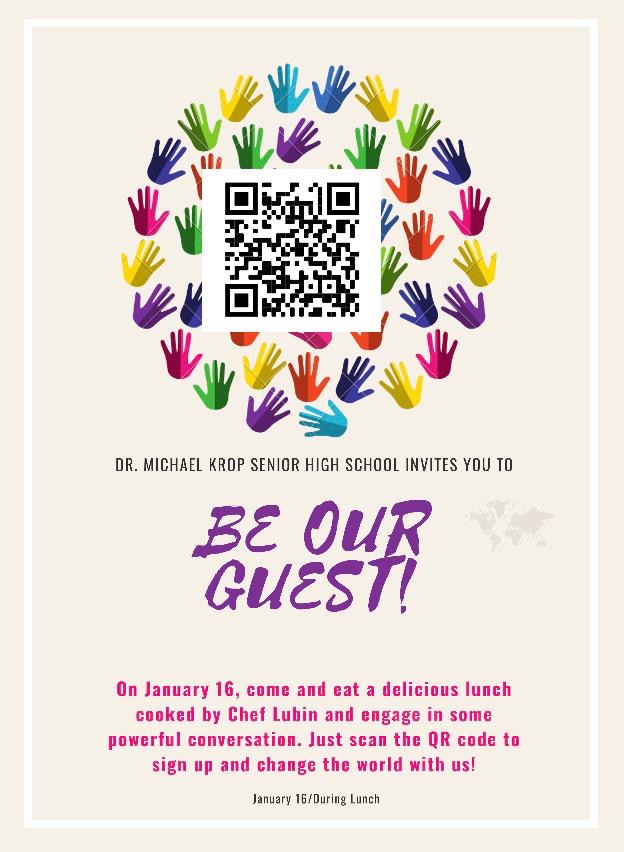 With close to 3,000 students it does not take more than a glance at school to realize one of the many advantages that Krop has to offer – its diversity. However, it is also evident that all of the different cultures, more often than not, do not interact with each other. Armed with these two facts, SGA decided to come up with a new event – Be Our Guest. The event aims to explore and talk about the divisions in our school and even propose ideas on how to fix them over a delicious meal.

Danielle Pinto, the SGA Director of Student Engagement was the one tasked with organizing the logistical part of the event. The first step was to compose a Google form that asked for students’ names, religion, gender, and ethnicity. This information was confidential and strictly viewed by Danielle to assign people particular tables that were as diverse as possible.

On Thursday, January 17th,  students arrived at the South Patio and were given a nametag as well as a table name. In the previous version of the event, grade was not taken into consideration. However, this time around, the tables were arranged as diverse as possible while keeping it to only one grade per table. This way, students would have more things in common and conversation would probably flow better. Furthermore, in many cases, the people who were sitting at the same table had seen each other around and maybe knew about each other but had never had an actual conversation. The leaders, who were mostly SGA members, were also matched to a table of people in their own grade.

Once the food that was prepared by Chef Lubin was served, the conversation started. First, leaders were encouraged to break the ice and talk about shows, movies, classes, sports and anything that could make everyone at the table feel more comfortable. Afterward,  the real conversation started. All leaders had a list of questions that had been previously drafted by the SGA Executive board. “Have you ever had a meaningful positive relationship or encounter with someone that was culturally/religiously/racially/Ideologically different than you?”, “When was there a time where you felt really proud of who you were?” and “Have you ever experienced discomfort because someone else made a preconceived notion about you”, where some of the prompts for the discussion.

“This event has impacted me in so many different ways. I truly love seeing people who would never have met before share a meal together and possibly find friendship.” Danielle said.

SGA has plans to invite all the people that have been participating in these events and do a large Be Our Guest social or activity to further promote the message of diversity. So, next time you see the Be Our Guest flyers around school, scan the QR code and join your peers in meaningful conversations while enjoying a hot (free!) meal.