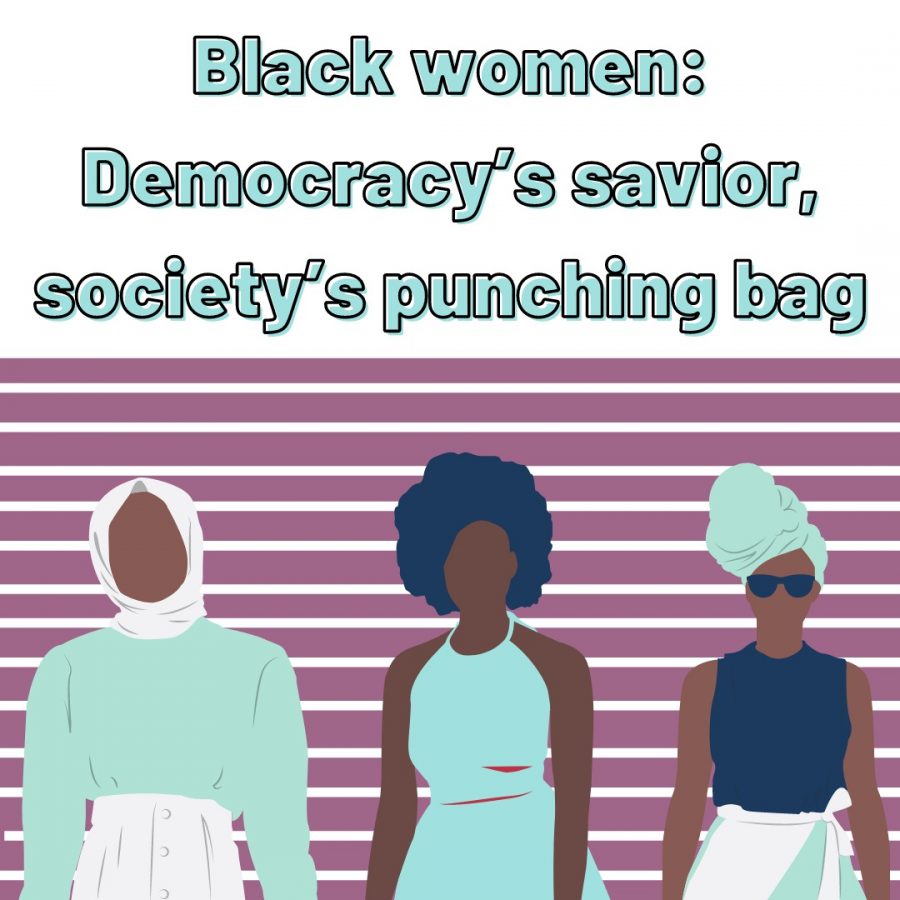 Malcolm X once said that the most disrespected person in America is the Black woman. Growing up, I have realized how correct he was with this statement. The 2020 presidential election has confirmed what we all knew to be true: Black women consistently show up and vote, essentially saving democracy by encouraging voter turnout, yet we are paid in blatant societal disrespect shown through popular stereotypes that are reinforced in our day-to-day lives.

A 2014 study done by the Center for American Progress found that among voters who identify as women of color, Black women are the largest and most politically active demographic, with 15 million eligible voters. According to a study done by the AFL-CIO, since 2012, Black women have been voting at higher rates than all other voters, with an 83 percent voter turnout, compared to 73 percent for all other women. With the Washington Post’s 2016 election exit polls, we saw that 95 percent of Black women voted for Hilary Clinton compared to 83 percent of Black men, 81 percent of nonwhite women, 70 percent of Hispanic women and 34 percent of white women (all with no college degree). It was Black women who attempted to stop the Trump administration from taking power, settling for Hilary Clinton despite her and her husband’s roles in anti-crime legislation that contributed to higher incarceration rates of Black men. But why? The answer is simply in Black women’s emphasis on community. The Atlantic has found that Black women vote based on collectivism and have a more policy-oriented focus, despite a general disillusionment of change from both parties. Black women face both the misogyny from a patriarchal society and the violent racism from a rising alt-right, so it makes sense that they would advocate for change within the Democratic Party rather than vote for the Republican Party, which has a more conservative view on women’s issues and a colorblind approach to race issues.

Democrat Stacey Abrams, who was Georgia’s former House of Representatives minority leader, ran for governor of Georgia in 2018 and lost by less than 55,000 votes due to her contender’s voter suppression. It was revealed that from 2010 to 2018 when Republican Brian Kemp served as Georgia’s Secretary of State, he purged about 1.4 million voters and 53,000 people had their registrations moved to “pending.” This was a direct result of Georgia’s “exact match” law that required handwritten voter registrations to be identical to personal documents. The Atlantic found that 80 percent of those 53,000 were Black voters. Due to Stacey Abrams, Helen Butler, Nsé Ufot, Deborah Scott, Tamieka Atkins and many more organizers, more than 800,000 people have registered to vote in Georgia since 2018, and the “exact match” policy was rescinded. It was Black women who organized to make this happen. It was Black women who allowed for Georgia to turn into a blue state for the first time since 1992.

Despite such monumental contributions, Black women are still being paid dust. Breonna Taylor, a woman who was shot in her own home by police, never got justice. The Human Rights Campaign has tracked over 202 reported cases of fatal violence against transgender and gender-nonconforming people over the past seven years — 66 percent of those cases are Black transgender women. Additionally, they have found that this year alone, there have been 37 reported transgender and gender nonconforming murders, with most victims being Black. You can thank Black women for allowing you a short reprieve from the state of the country today.

Now that Biden is confirmed as president-elect, will the work of Black women be in vain and their voices silenced now that “normalcy” is restored? Or will the government finally be held accountable to enact the changes they campaigned on? Only time will tell, but I have a good feeling that this generation, Black women and allies nationwide will continue to fight as voting is only half the work. At the end of the day, this country cannot survive as divided as it is now. Together, we can work to purify a country that is so deeply entrenched in white supremacy. As Patrick Henry said in his last public speech, “United we stand, divided we fall.”