Borat is back: How Sacha Baron Cohen’s iconic character returned to save America 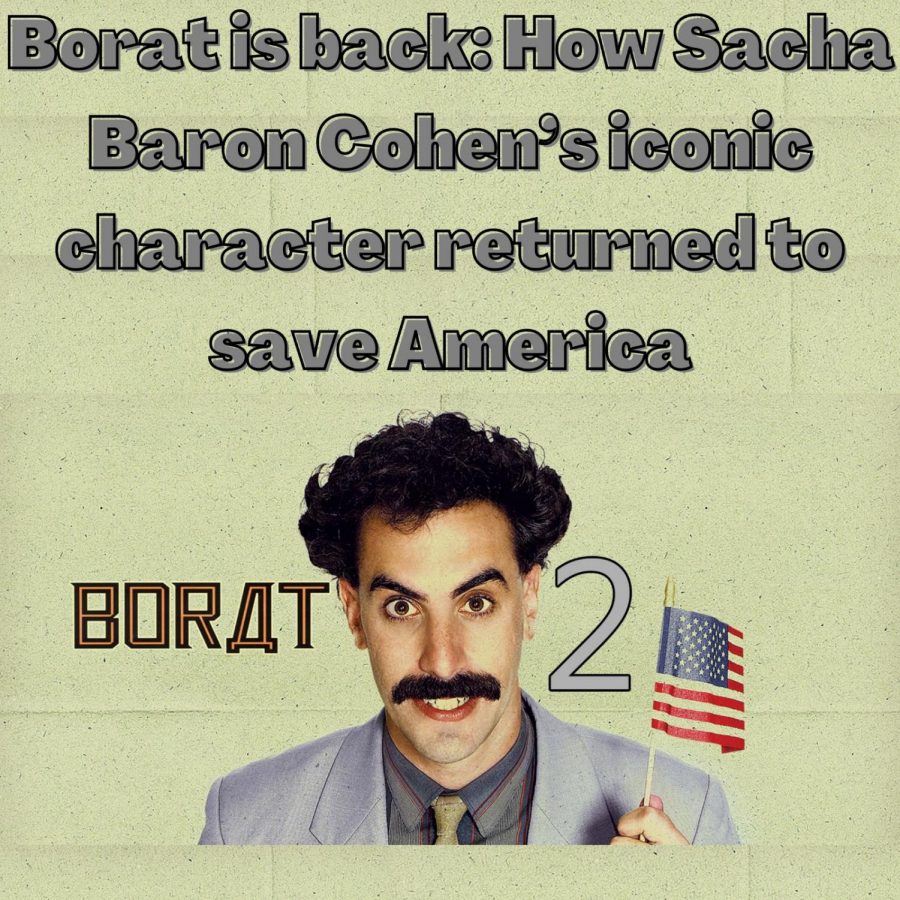 Borat, Sacha Baron Cohen’s most iconic character, is back with “Borat Subsequent Moviefilm,” a sequel to the groundbreaking 2006 comedy.

The plot of this long awaited sequel is insane and humorous, leaving plenty of space for ridiculous situations and revolting jokes.

Borat Sagadiyev, our main character, is humiliated nationwide and sent to prison for embarrassing Kazakhstan after the events of “Borat: Cultural Learnings of America For Make Benefit Glorious Nation of Kazakhstan.” After 14 years in the gulag, Borat is given a mission to deliver a gift to President Donald Trump in order to redeem himself and be pardoned of all charges. Borat arrives in the United States once more, only to discover that his 15-year-old daughter followed him all the way. What follows is a completely unhinged story that spans all of 2020, taking Borat and his daughter from state to state, from the Republican National Convention to the remote cabins of QAnon conspirators.

Most of the scenes follow the formula of Cohen’s recent political satire “Who Is America,” in which he dresses up as absurd characters, completely embarrassing unaware politicians on camera. While the first Borat movie saw Cohen roaming inconspicuously around the United States, this time around, because of his renowned fame, he is too recognizable and needs to hide his Borat character. This condition takes the edge off the film, making the viewer oftentimes forget that it’s Borat trolling all of these innocent people, rather than Cohen. Much of the spontaneity of the original movie is lost due to this unavoidable circumstance, but its charm remains.

Cohen and newcomer Maria Bakalova are amazing in their respective roles as Borat and Tutar Sagadiyev, and their convoluted father-daughter relationship is a joy to watch. Bakalova is sensational as Borat’s only daughter, bringing a new and hilarious voice to the movie. While the mockumentary style is an old trope nowadays, Cohen and his team deliver a great entry to the niche genre. The script, although heavily improvised, is intricate and funny, with many twists and turns that add to the absurdity of the film. The film’s direction, cinematography and editing are no feats of wonder, but they complement the acting and dialogue adequately enough, amplifying the more important aspects of the film.

Cohen loves causing controversy any chance he can get, and does so multiple times throughout the film. He sends his on-screen daughter as prey to Rudy Giuliani, almost making Giuliani believe he’s about to get intimate with her, only to run into the room half naked yelling at Giuliani to take him instead. The scene caused a formal explanation from Giuliani himself, defending his actions in the movie and accusing Cohen of being a “stone cold liar.”

Despite all the varied reactions and comments the movie received, one thing is apparent: Cohen does an incredible job of satirizing the current social and political climate of our country, while creating a laugh-out-loud experience.

Cohen’s crowning achievement transcends the screen and reflects reality like no other film has done this year. The film reflects and critiques the America of now better than any piece of art that found its way to our living rooms in 2020, showing us the true nature of our country through a comedic, and often sad, lens.