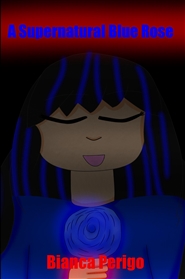 Most teenagers could never imagine writing anything over a couple of pages, but green-haired, Disney-loving Junior Bianca Pergi is not your average teen.

After three years of dedication, she self-published her book, A Supernatural Blue Rose, which  tells the story of a group of supernatural children who are persecuted by the government while struggling to be accepted in society.

This novel started as an entry for a short-story competition and Pergi admits that she did not think she would finish it.

The sci-fi stories she read as a middle-schooler were her inspiration. Mrs. Hershey, a language arts teacher, also had a huge influence on her.

“I believe Mrs. Hershey helped out a lot when I was in her class last year,” Pergi said. “She did a lot of writing assessments and reading assignments, so that is what kind of inspired me to write my own stories.”

Pergi said that while she can’t allocate as much time to read now due to her Advanced Placement English Language class, she enjoys the books and poems that are discussed in English Honor Society.

However, Pergi has never been a picky-reader. She reads everything from picture books to novels such as Rick Riordan’s Percy Jackson series, but everyone has favorites.

“My favorite book actually is kind of strange because no one really knows it,” she said. “It is from a series called Kingdom Keepers and it’s about Disney after dark. Thinking of attractions like ‘It is a Small World’ after the parks close is really creepy and the author is able to capture that.”

Disney is big in her life. She claims that she can visualize the parks’ maps in her head with 100% accuracy, making her the perfect tour guide. For college, she will be staying close to the “happiest place on earth.” She is planning on attending a state college and studying to become a math teacher.

So, remember the name of Bianca Pergi, since the next time you read about her might be under the list New York Times Bestselling Authors. But for now, you can find her writing, talking about Disney or walking around the Krop hallways.