To combat racism, come together as community 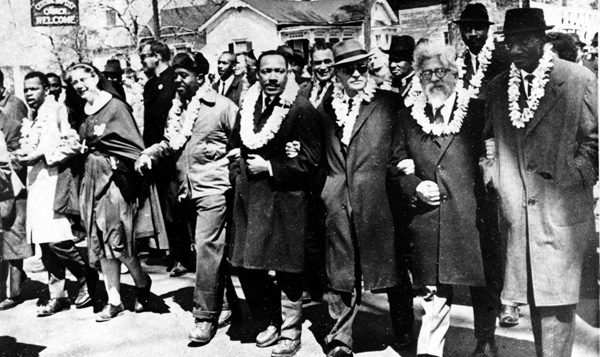 In the morning hours of September 15, 1963, as four young African American girls were getting ready for the Sunday church service at the 16th Street Baptist Church in Birmingham, a bomb exploded, tragically ending their short lives.

The horrific acts of that Sunday prompted outrage nationwide and bolstered support for the civil rights movement in the early 1960s. Two years later, Dr. Martin Luther King Jr. led the Selma-to-Montgomery marches. Among the more than 2,500 protesters was a group of Jewish leaders. One of them was Rabbi Abraham Joshua Heschel.

Born in Poland but living in Germany, Heschel was deported by the Nazis during their rise to power. He witnessed firsthand the dangers of toxic ideology spread among the masses of society. He witnessed the prologue of one of humanity’s worst stories. But when tested by the ills of segregation – including hyper-divisive politics and rhetoric – Heschel recalled the devastating events of the Holocaust.

Dr. Susannah Heschel, Rabbi Heschel’s daughter and professor of Jewish Studies at Dartmouth College, remembers that the civil rights movement defined much of her upbringing.

“For my father and my home, political issues were moral issues; they were religious issues. It wasn’t about politics—in fact, that word ‘politics’ really wasn’t used. It was about religious meaning and the Bible,” she told Moment Magazine.

To Rabbi Heschel, marching was a religious moment. He famously noted, “I felt my legs were praying.”

Heschel fought for the African American community; King spoke out against anti-Semitism and cared for the security of the State of Israel. Both condemned the Vietnam war. Both learned from each other and cared for each other’s peoples.

Today, we are confronted with our own struggles. Although segregation is no longer legal, our society’s very real struggles are more endemic, manifesting themselves in the deportation of DACA recipients – 690,000 Americans brought to this country as undocumented children but at no fault of their own; loss of healthcare benefits for nearly 13 million people; and economic injustice for nearly 50 million people living below the poverty line in the U.S. On other fronts, our society faces racial divides and the highest number of hate crimes in five years, according to the FBI.

To combat these issues, communities of all races and creeds must come together. The Jewish community, plagued by the largest proportion of religiously motivated hate crimes in 2016, must realize that it must stand with minorities facing discrimination, for it was in Selma where Rabbi Heschel’s legs prayed. With every step, another prayer uttered.

“If you believe all are created equal, come to Selma,” King proclaimed as a call to action for people to join him.

If you are naïve enough to believe America’s dark past is not pervasive today, come to the realization that the success of all groups who struggle is tied together. The true test of our time is whether we can come together and face the evils of our society.

To be the Abraham Joshua Heschels of today, we must renounce our indifference to the sufferings of other peoples. Overcoming the obstacles we face requires joining other oppressed peoples in a united struggle for freedom.