Out to save the world: How the Green New Deal promises to change the U.S. for the better 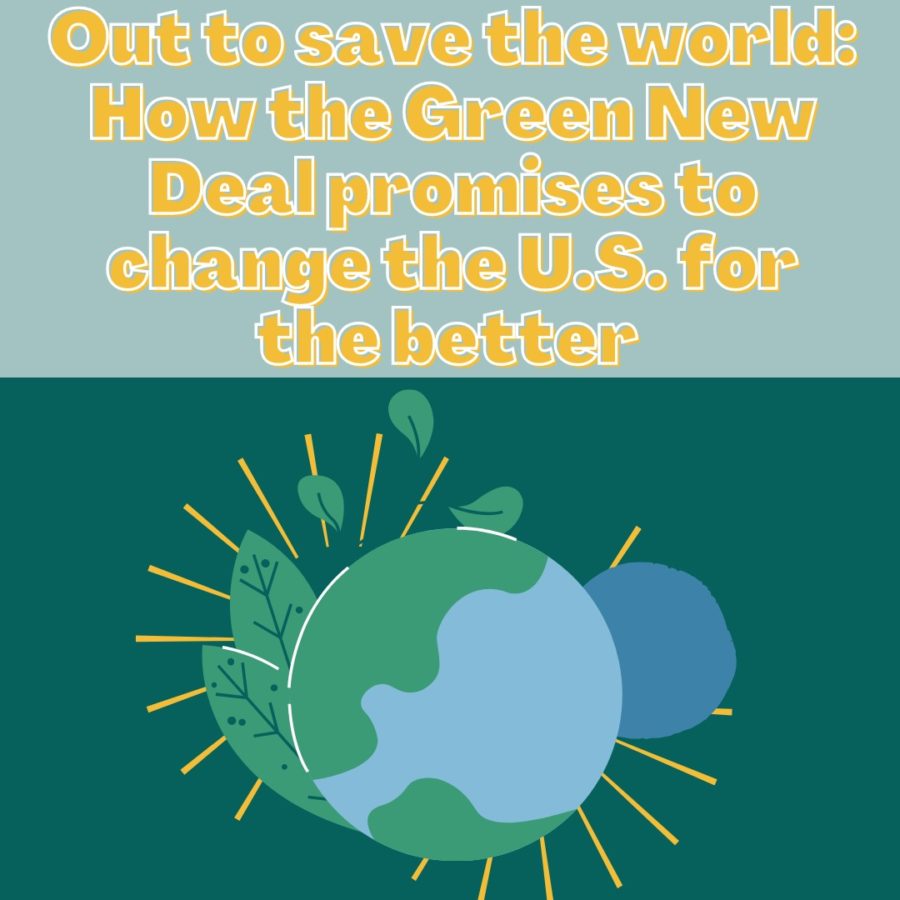 Hurricanes, wildfires and flash floods; 2020 brought many disasters with it, but these natural catastrophes have been on a steady climb since the 1970s, and are intensified by the biggest issue facing all mankind: global warming. The United States has ignored and fueled global warming for far too long and needs to take bold and swift steps to secure the future of Planet Earth.

One of the greatest relief programs in American history was the New Deal, introduced by Franklin D. Roosevelt in the midst of the Great Depression. The ambitious plan saved the lives of millions of Americans suffering through the biggest economical crisis the country had ever seen. The progressive vision of Roosevelt still resonates today; although, it is through a different but equally important light: the implementation of the Green New Deal (GND).

The basic idea for the GND was proposed in 2007, but didn’t enter popular discussion until 2019, when Rep. Alexandria Ocasio-Cortez (D-NY) and Sen. Ed Markey (D-Mass.) introduced a nonbinding resolution to Congress to create one. The proposition’s main objective was for the United States to completely transition into renewable energy by 2030, and ensure jobs, education and relief to every American citizen. The broad plan also called for massive investments in both decarbonating industries and supporting communities affected by climate change.

As the second biggest producer of carbon dioxide (CO2) behind China, the United States needs to lead the world into minimizing the effects of the ever-growing climate disaster, and the GND is the only plan ambitious enough to achieve that.

Most criticism against the GND comes from a place of doubt and fear. Some Americans fear that it will decrease jobs, directly harm minorities and increase the debt, and while these concerns are valid and from a reasonable standpoint, the GND addresses these concerns and more. The GND will create millions of new jobs in the new green economy that could potentially replace jobs that would get lost in the fossil fuel industry. While the amount spent on the GND is no laughing matter, it’s an investment in the future of humankind. Global warming is going to cause more expenses and damage to the federal government as it intensifies, with money spent on disaster relief, public infrastructure and unnatural weather events increasing every year.

“The plan also emphasizes environmental and social justice,” Deborah Dsouza, the News Editor of Investopedia, said. “It acknowledges how historically oppressed groups—indigenous peoples, people of color, the poor and migrants—are more likely to be affected by climate change and asks that they be included and consulted.”

This excerpt perfectly captures the forward-looking and all-inclusive nature of the GND, a program that promises to correct historical injustices and prevent further inequity done to minorities and to the poor throughout the history of the United States. President Joe Biden’s Clean Energy Revolution, which plans to cut CO2 emissions fully by 2050 on a lower cost than the GND, completely ignores the issue of fracking and only achieves in limiting the power of the fossil fuel industry, without offering any of the societal and environmental reforms the GND promises. The goal of the GND is bigger than just combating climate change, it promises a better life for every citizen of this country.

While these concerns come from a rational standpoint, there is opposition to it that stems from a place of ignorance and greed. Most conservatives, and even former-president Donald Trump himself, claim that global warming defies science and common knowledge. According to the New York Times, during his term, Trump rolled back more than 100 environmental regulations that directly contributed to increased global warming. In response to the intense wildfires in California last year, he said that “science doesn’t know” what is causing them and tweets from before he became president show him undermining and even making fun of global warming. His efforts to completely ignore this pressing issue have caused irreversible damage to the ideology of many Americans.

Global warming is real and imminent, even if the most powerful and influential people on the planet refuse to acknowledge its existence. While the implementation of a program in the magnitude of the GND might look hard in the current political climate, it’s more than just an unachievable dream. Progressive candidates in the Senate are still fighting for it, organizations like the Sunrise Movement are organizing on a national level to fight climate change and influential figures such as Greta Thunberg, an 18-year-old climate activist, are confronting political leaders to fight for change, which is bringing attention to the issue on an international level.

Global warming is going to be the fight of the current and upcoming generations, a sad reality most kids and teenagers are going to have to face in their lifetime. To combat climate change, a massive reworking of the American economy and way of life has to take place, with the combined effort of every citizen. The GND has to be implemented immediately if humankind wants to have a future on Earth.