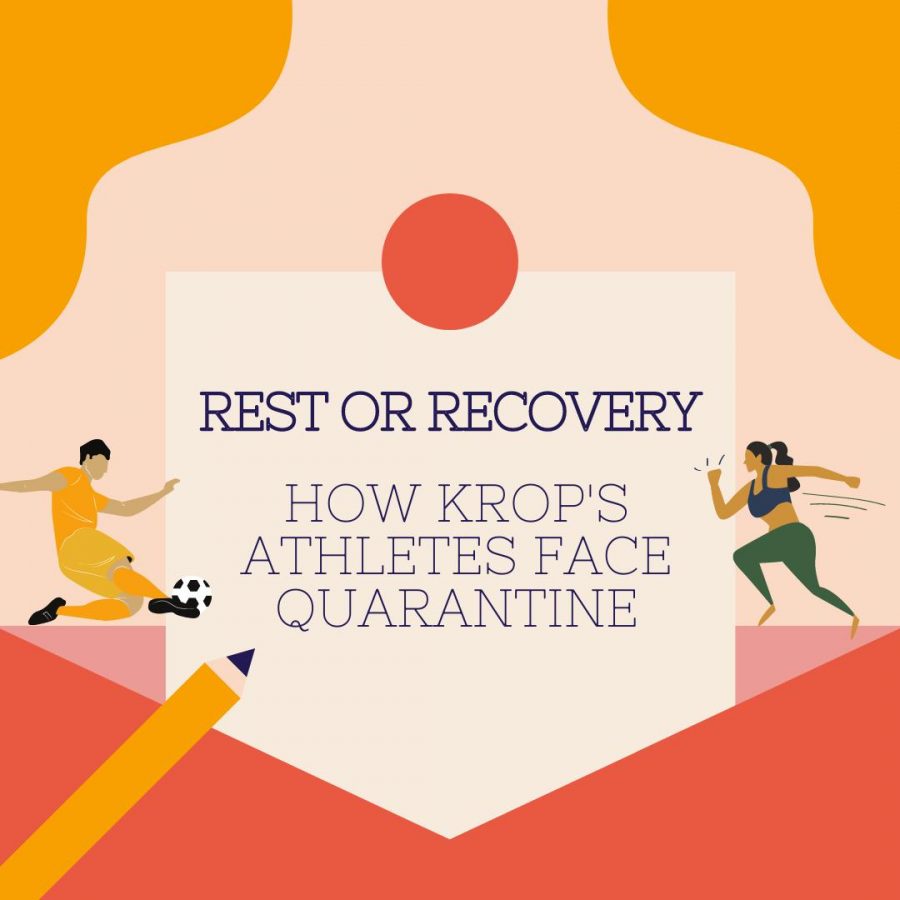 Due to COVID-19, many of Krop’s sports seasons came to an abrupt end, and our athletes experienced major shifts in their vigorous sport-consumed lifestyles. Since March 13, their team uniforms have remained in their closet, yet their adaptation to this disordered circumstance has tested their mental and physical commitment.

Senior Brianna Easy, who runs for the girls’ track team, said that the pandemic not only decreased her overall fitness, but her motivation as well. During the beginning of quarantine, Easy tried to exercise as much as she could. Still, with warm temperatures and the use of a mask, she said her energy levels decreased much more rapidly than before, and that it felt as if there wasn’t enough oxygen entering her system.

Over the course of her sports journey, Easy’s track record was at its peak before quarantine, which encouraged her to push her boundaries in the search for college scholarships. However, her static routine began to increase her stress levels because Easy isn’t able to show the best that she can offer. She also expressed that not having her team around or any sport tournaments to prepare for caused her to become extremely aimless.

“I didn’t feel motivated enough to run compared to when I had track practice and had no other choice but to run and get better to make it to states,” Easy said.

Even so, every athlete’s experience during the pandemic has been different. Gabriel Ades, a sophomore on the boys’ volleyball team, has seen a complete increase in his performance and athletic capability. These seven months of “break” have allowed him to focus his energy into becoming the best version of himself.

Rather than spot training, which is working out specific muscles in your body, Ades has switched his workout routine to full-body exercises and calisthenics. According to Daniel Davis from Men’sHealth, calisthenics utilizes gravity and bodyweight to challenge your vigor. Ades applies this method by doing push-ups that involve the arms, chest, core and back, contrary to doing bench presses that focus on the arms and shoulders.

“I found the silver lining through the chaos,” Ades said. “And as much as I was annoyed by quarantine, this was one of the benefits that came out of it.”

Another athlete, senior Jeremy Nichols, who plays for the boys’ soccer team, noticed the impact of having to put his sport on hold. Nichols said that because of the pandemic, he now views soccer as more of a hobby than a competitive sport.

Like many others during the pandemic, Nichols’ center of attention shifted away from his sport. For this reason, he said the hardest challenge was to get back the stamina that he had built before. Despite Krop not having practice over the quarantine, Nichols’ out-of-school soccer team rented the field at Ives Estates Park, and they started training again in early July. Nevertheless, until this day, he doesn’t feel as if things are back to normal when it comes to his training activities. On account of the park’s rules and CDC guidelines, he’s not able to play in tournaments until the end of October and the team can only have a restricted number of people on the field at the same time. In practice, Nichols’ group doesn’t have to wear masks, but they do have to maintain a social distance. Because of this, his coaches have been concentrating on maintaining their fitness level for now, not improving it.

Other athletes, such as girls’ basketball player senior Lindsey Weingard, have found that relying on their own encouragement was the factor that preserved their agility and proficiency. Being a strong supporter of the relationship that a team develops, Weingard found the separation from her friends was the biggest obstacle she had to overcome. Some of the girls on her close-knit team have been playing sports with her since she was 12 years old, and she described that not being able to finish off their last season together is heartbreaking.

“The biggest lesson I learned was to be flexible and just go with the flow because you can’t get mad over things you can’t control,” Weingard said.

While her isolation was tough, so was having to adjust from a set practice time every week to working out individually. Due to the feeling of a slight decrease in athleticism, Weingard modified her exercise routine by running about one to two miles a day, or jogging around the Aventura Circle. Adding on, she voiced that COVID-19 affected the entire recruitment process for her. The inability to take campus visits, talk to the coaches in person, meet the universities’ players or check-out the facilities at the schools made it more problematic to determine if that college was the best fit for her. Weingard stated that the entire process was over Zoom, phone or live stream, which took the excitement out of it.

“The coaches couldn’t watch us play at our tournaments because there weren’t many, and with the couple that were taking place, they had to watch us play over a live-stream video feed,” Weingard said.

The pandemic carved a significant mark in history, and Krop’s athletes’ mental and physical determination were tested. While some of our students prevailed through these tough times, others focused on keeping their athletic ability in the same condition that it was in before COVID-19. As we gradually return back to “normal,” we can only hope that the various obstacles that each player faced will be overcomed.